The Adaptation Fund Programme in Kenya

One Year into Adaptation Fund Programme in Kenya

The National Environment Management Authority (NEMA) is implementing Adaptation Fund Programme titled “The Integrated Programme to Build Resilience to Climate Change and Adaptive Capacity of Vulnerable communities in Kenya” is a national programme seeking to address climate change impacts and has the following objectives:

iii) Increasing resilience to the effects of rise in sea level and shoreline changes through  Integrated Shoreline and Mangrove Ecosystem Management at Vanga and Gazi in the Coastal region of Kenya.

The programme is running for three years, 2016-2018 and is being implemented by eleven executing entities in fourteen Counties.

Implementation of Kenya’s Adaptation Fund Programme: One year down

The implementation of this programme commenced in 2016 and has achieved significant milestones in each of the five objectives that the programme addresses.
In line with the first objective, the programme has initiated diversification of livelihoods through the adoption of drought tolerant and high-value crops, increased animal production through promotion of drought-resistant fodder crops, pasture conservation and emergency fodder banks.

To illustrate this in Marsabit County, communities in Waldaa area have been supported to grow butternuts, watermelon, Sudan grass and other vegetables. Efficient irrigation methods have been employed to achieve productivity. The project beneficiaries are now fetching alternative source of income and also have direct source of food in an area that is commonly hit by drought.

One of the beneficiaries explains; “Before the Waldaa project, I just used to sit at home. The farming has really boosted my spirits. My six children never miss food because as you saw, I just sold 4 watermelons at Ksh.400.

I also plant spinach and kale alongside an onion nursery,” Eleba Galgalo. Apart from supporting the farmers with land, this project also provides farm inputs such as seeds and seedlings, fertilizers, agrochemicals and training on agronomic practices. More benefits include post-harvest management and value addition of the produce.

“Once the entire farm is put under production, the overall yield will be over 3,000 metric tons of food being grown on this farm, which will be a phenomenon,” Dr. Gullet, the Secretary-General of the Executing Entity (KRCS) added. Related food security interventions are proposed milk cooling plant in Emali, fish cooling storage in Masinga and a fruit processing plant in lower eastern region.Other counties with food security interventions are, Kisumu,Kwale, Mombasa, Homa Bay, and Laikipia. 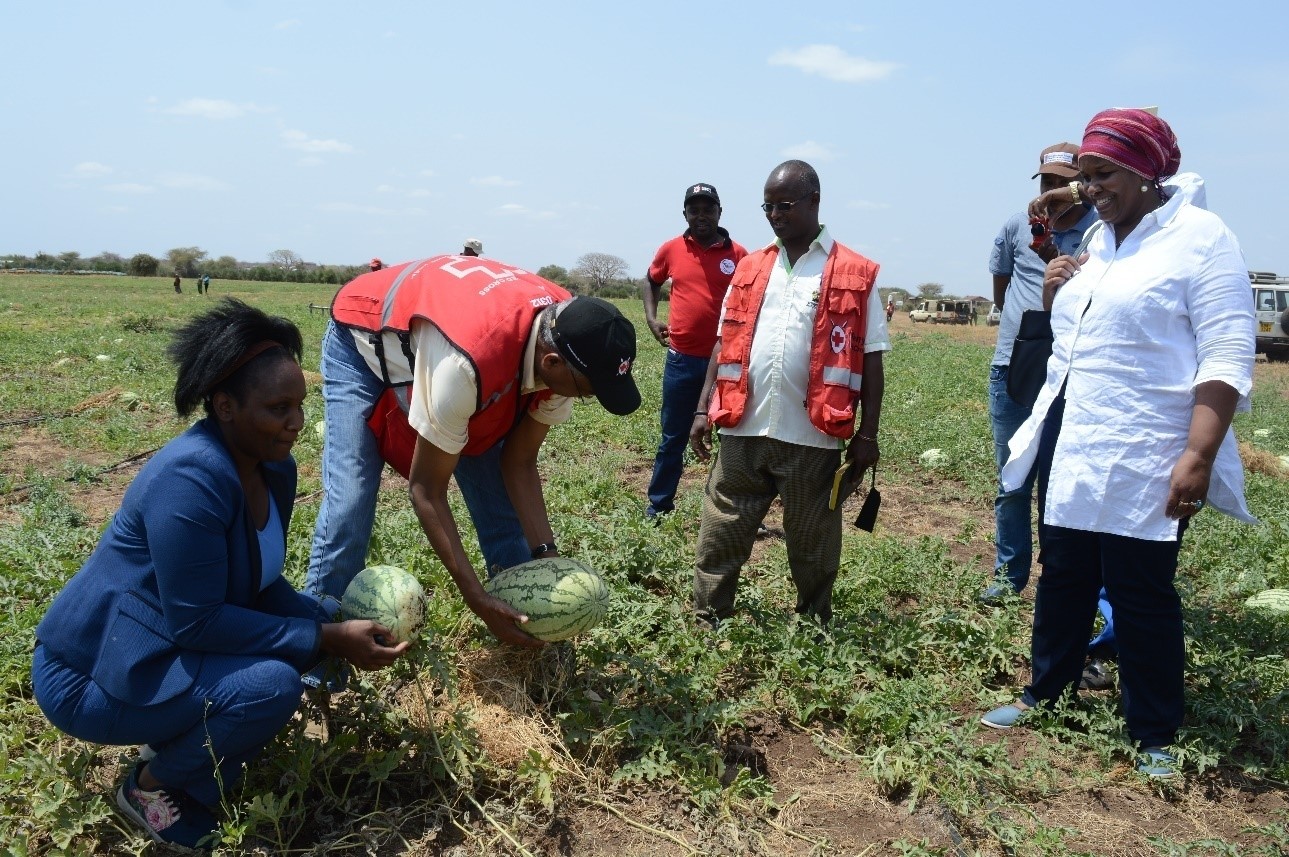 (From left) The NEMA NIE coordinator Ms Wangare Kirumba and the KRCS Secretary General Mr. Abbas Gullet accompanied by other officials sampling some of the Watermelons that were harvested under drip irrigation in Waldaa, Marsabit County.

On water management which is the second objective, this programme seeks to improve climate resilient water management systems to enhance food security. To realize this objective, appropriate physical assets and infrastructure for water harvesting, storage and irrigation are being established which include roof catchments and water pans. For instance, in Taita Taveta, Kilifi and Kwale counties, schools have been selected to benefit from rainwater harvesting and storage facilities.

In Laikipia, a water intake along Thome River is due for construction which will be transported through a 300mm wide pipe over a distance covering 9.348km to provide water to households in Thome area.

In Kajiado County, installation of micro irrigation kits for kitchen gardens has been implemented as other water harvesting structures are underway. 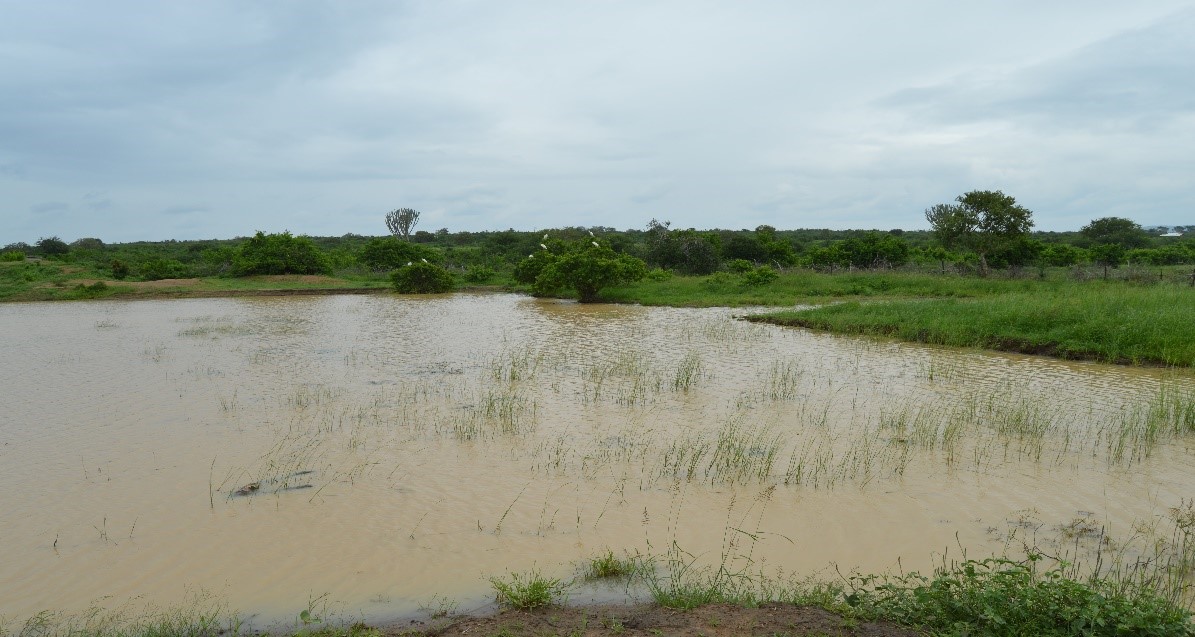 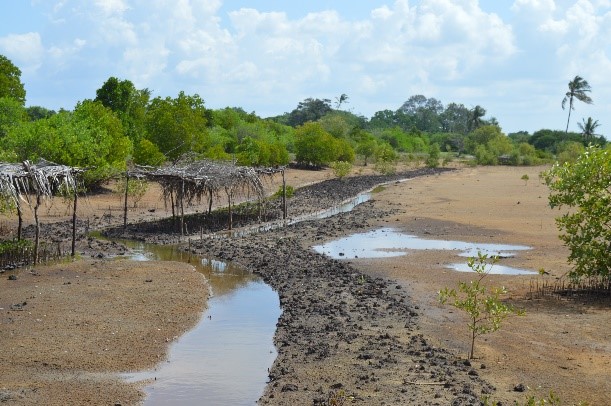 Towards this objective, communities in Kwale have been assisted to establish mangrove tree nurseries that will rehabilitate mangrove ecosystems, protect coral reefs, erosion and accretion control in Vanga and Gazi areas.

This project is being implemented through Integrated Shoreline and Mangrove Ecosystem Management (ISMEM) and will also include setting up of an inventory and GIS database for the shoreline and mangrove ecosystems. 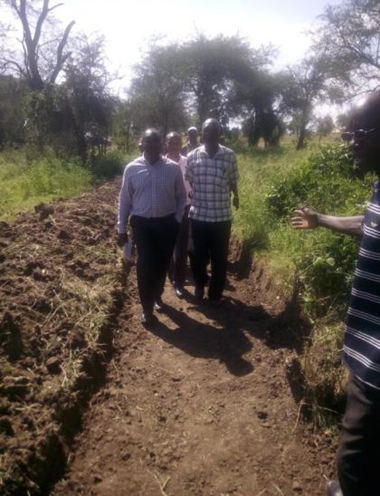 A canal for DRR at Obuge site in Kisumu

On disaster risk reduction, this programme is designed to increase the level of preparedness of communities in along Nyando, Awach and Ombeyi rivers in Kisumu County. Establishment of flood and drought adaptation measures on selected sites has commenced, and early warning systems will be established and implemented.

Knowledge management has been strengthened and EEs have been sharing experiences about their different projects.  NEMA is optimistic that, come the end of the three-year project period, the target communities shall not only have been able to embrace and benefit fully from the interventions of this programme, but will also have their inherent community driven and community-owned adaptive capacities enhanced.